Q & A With Our Brewmaster, James Wilson

This month we had the chance to chat craft beer with our ever-so-talented and passionate Brewmaster, James Wilson! We hope you learn a few fun facts about the brewing industry, our brewing vision, and about James himself. James also shares some very exciting news on a new addition to our home, “The Village”.

At Thornbury Village, we pride ourselves on our traditional, small-batch brewing methods. Our beers are carefully handcrafted with a strong commitment to brewing European style Pilsners and Lagers, using top quality ingredients. We have stayed true to our traditional brewing methods since our first brew, and will continue to for years to come. Our Brewmaster, James, is proud to be brewing award winning brews, while staying true to the methods that have been proven to produce ultra-premium beer with the added freshness of a local product. We make our beer in no particular hurry, taking our time to do it right. Besides, what’s the rush?

Can you tell us about your brewing background? What brought you into the brewing industry, and then to work as Thornbury Craft’s Brewmaster?

James: I took a trip to Poland towards the end of high school and it was there that I learned all beer isn’t just fizzy and tasteless. I began exploring different styles when I got home, and it was when I tried my first Oatmeal Stout that I was inspired to try this home brewing thing I’d been hearing all about. I started home brewing with a friend in his backyard. I then was hired on at King Brewery (later renamed Thornbury) to wash kegs, help out on the bottling line, mop the floor, that sort of thing. Eventually, I learned from there and I’ve been brewing ever since. I’ve been brewing professionally for going on 10 years.

When was Thornbury Craft’s first beer brewed and what style of beer was it?

James: Our original Pilsner which put us on the map. That’s the only beer we brewed for years until we developed the Amber and Dark lagers in 2010.

What is your favourite part about working as a Brewmaster in the Ontario Craft Beer industry?

James: The cliché answer is the free beer of course! In all seriousness, I’d say the camaraderie between the brewers and breweries. It’s a very decent group of people who get along really well. There is lot’s of information and inspiration shared back and forth between us and the various industry gatherings are always a great time.

The Ontario Craft Beer industry has grown exponentially in the last decade. How does Thornbury Craft differentiate itself from other craft breweries across the province?

James: I think what makes us different is the way we go about brewing our traditional, old-world style beers. Our brewhouse is designed to allow us to brew using the decoction method which I believe is essential to our process and what makes our beer what it is. It takes much longer to do things this way, but it’s worth it.

Thornbury Craft has won awards at the World Beer Awards for the last 5 years (2019 awards included below). How does it feel brewing such highly regarded, world famous beers?

James: Wow, how does one go about answering that one? Haha. Winning an award obviously feels great but it’s not really something I think about day-to-day. When you win an award, it’s for a batch that you’ve already brewed and released. While the recognition is very nice to have, I’m already thinking about the next batch we’re about to make. It is nice to hear when people bring it up though!

You know the saying, “brew with a view”. Where do you like to enjoy a cold one?

James: I don’t mind having a beer anywhere to be honest. Love it on the golf course, sitting on a dock, and while hiking with my dog Riker.

Pickup No. 26 Pilsner, Ladder Run Amber Lager, Dam Dark Lager, and Blue Mountain Light Lager all have symbolic names to Thornbury and the surrounding area. To you, which one is the most symbolic and why?

James: I guess it’s a toss up between Ladder Run and Blue Mountain. Everyone knows what The Blue Mountains are but I was surprised to learn just how popular the fish ladder is in Thornbury. Located in the heart of Thornbury, the Beaver River is home to trout and salmon. Our Ladder Run Amber is a tribute to the fish ladder that allows fish up the river to spawn. Come Fall, it’s exciting (for us) to watch the jumping Chinook Salmon migrate.

Thornbury prides itself on brewing small batch European Pilsners and Lagers that are authentic, traditional and ultra-premium. In your own words, what makes a craft beer truly authentic?

James: I suppose you try to respect the methods developed over centuries as best as you can. Innovation is great, but the classics are classic for a reason.

What are your favourite styles of brews to experiment with?

James: These sorts of questions are tough to answer. Haha. I brew what I feel like drinking at the time and what I think might be great to have for the time of year. I have a hankering to make a Black IPA or a Weissbier right now. We’ll see what mood I’m in tomorrow.

There is a big addition being built behind Thornbury Village. Can you share any hints about this to get our readers excited?

James: We are building a brewery expansion! Super excited about this and I’ve been looking forward to it for a long time! It’s going to look fantastic and I can’t wait to get started. We’re going to have big glass doors so everyone can take a look inside. We’re really aiming to make this a nice showpiece to welcome visitors to our little town.

The question we’ve all been waiting for! James, what is your top favourite beer? And what meal would you pair it with?

James: Good question! It’s impossible to name a top favourite, but I’ll say I’m really enjoying our new Session IPA. It’s hoppy, fragrant, and really easy to drink. I’m not the type of person who pairs meals and drinks very often but I’d say this would go great with some good pizza. Who doesn’t love pizza and beer right? 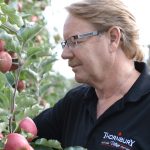 Q & A With Our Cider Master, Doug Johnson! 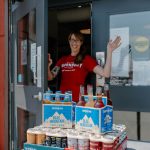 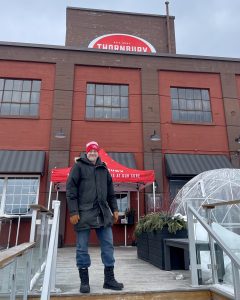 Q & A With our Local Sales Rep, Ethan Martel! 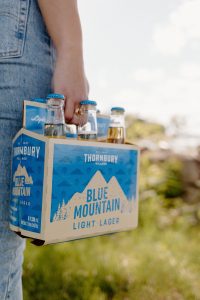