Q & A With Our Cider Master, Doug Johnson

Have you ever wondered who’s behind the magic of our delicious cider? Or have you simply wanted to learn more about our Cider Maker? This month we had the opportunity to chat with Doug Johnson, our “Man Behind The Magic” AKA Cider Master and Manager of Operations at Thornbury Village since we opened in 2007.

Read on to learn more interesting, quirky facts about our Cider Master, Doug! If you’re a new (or) long standing Thornbury Craft fan, we hope you enjoy reading & take away some information to share among your friends and family. Cheers!

What is your cider background? And what brought you to work in the heart of Ontario’s Apple Country?

I have a background in biochemistry with 35 years’ experience in various types of fermentations such as enzyme, acetobacter and alcoholic fermentations. I have been involved with the technical side of processing apples for almost 35 years and therefore have an intimate knowledge about apples and apple processing. I also have over 30 years experience in research and development activities in the food and beverage industry. I have been with Thornbury Village Craft Cider House since the very beginning. I developed the first cider for the Thornbury Village Cidery in my basement before even starting to work for the Cidery. When I started to work for the Thornbury Cidery in 2007, there were no tanks or any other equipment. I started from scratch with nothing in place. At that time, I was the only person working in the cidery. 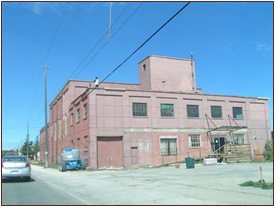 Ontario is rich with apple orchards spread all throughout the province. What makes Thornbury the heart of it?

Georgian Bay area is the largest apple growing area in Ontario. The quick explanation for this is the Georgian Bay microclimate created by Georgian Bay and the Niagara Escarpment. The main reason for this is the microclimate created by two natural features in our area. The most significant of these features is the Georgian Bay, a large and deep body of water. Georgian Bay has a moderating effect on the air temperature which reduces the chances of late spring and early fall frosts. The second feature is the Niagara Escarpment which forms a southern protective, confining boundary to contain the moderating micro climate to the fertile soils near the bay, allowing the apple trees to thrive.

Thornbury Cider House is an iconic and historic building. In your opinion, what is the most unique fact about the building itself?

The building was to be used as a bomb shelter for politicians in the event of a bombing attack during the Cold War.

If explained in a few words, what distinguishes Thornbury cider as authentic?

What creates the crisp, dryness of Thornbury’s Premium Apple Cider?

The key factor is utilizing a Champagne style yeast.

Thornbury has experimented with a variety of delicious, speciality ciders. If you had to choose, which one is your favourite and why?

My favourite new experimental cider is a new style of cider we have been working on. We expect that we will be doing a soft launch this summer. Unfortunately, I cannot tell you about it at this time except that we are quite excited about it.

Thornbury’s Honey Crisp Apple Cider was referred to as the “unattainable dream” within the Ontario Cider Industry, until now! Can you tell us more about this?

There have been rumours for quite a few years stating that numerous people have tried to make cider from 100% Honey Crisp apples (and not flavoured), and for some unknown reasons, they were not able to make it taste good. I was asked to give it a try and we believe we were successful at crafting an excellent tasting Cider made with Honey Crisp apples. There are some Honey Crisp ciders out in the market but they are flavoured honey crisp cider.

If you could give one tip to someone just starting out in their cider-making journey, what would that be?

Determine concise objectives of what you want to achieve and then do a lot of research up front before you ever start trying to make a drop of cider.

When you’re not busy making Ontario’s top selling cider, how do you like to spend your time?

I enjoy playing hockey year round.

Last, but definitely not least… What is your go to cider?

At this point in time, it is our new Honey Crisp Cider. It is extremely easy to drink. It is a light, smooth, slightly dry cider with soft apple notes and a very faint note of honey.

Our Honey Crisp Apple Cider is now available in the LCBO! Stock up on this new, delicious creation and tell us what you think on social media.

Use hashtag #ThornburyHoneycrisp (or) tag us @thornburycraft to be featured on our page.

Q & A With Our Brewmaster, James Wilson!

Q & A With our Local Sales Rep, Ethan Martel!